You are here: Home1 / Our colleagues: Māris Kudums 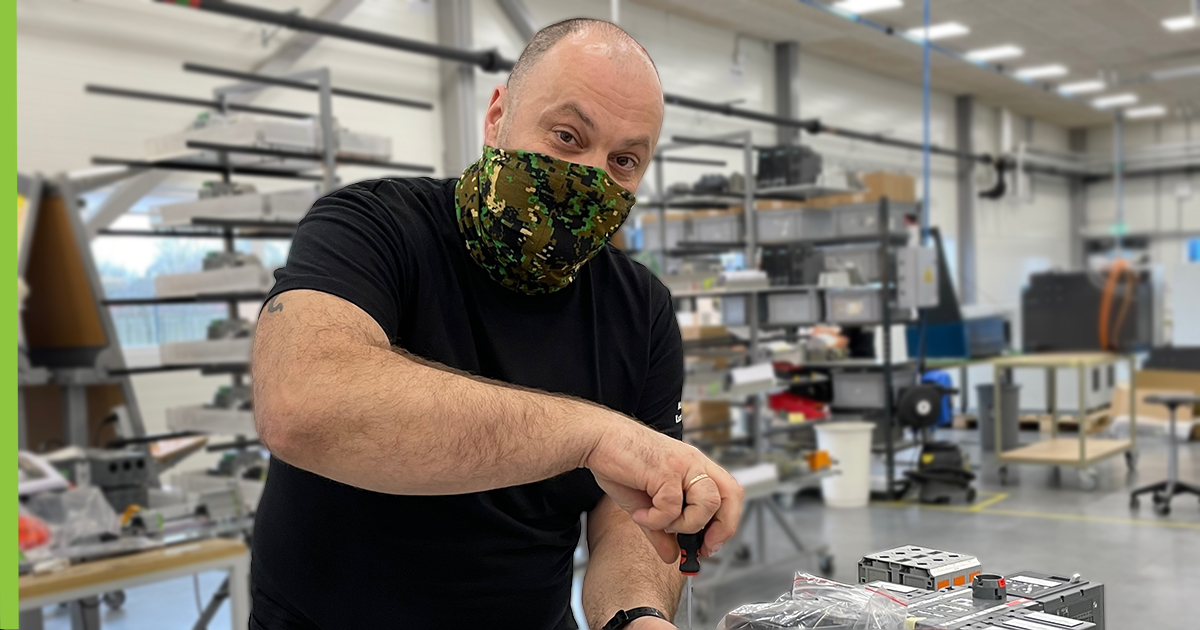 Māris himself laughs that he has been working in AE Partner since the Stone Age, but if we consider that the average length of service of an employee in the company is 5 years, Māris is one of the “juniors.”
It is safe to say that Māris is given 36 hours a day, because, with energy and a smile on his lips, he does hundreds of smaller and bigger things from sports to art, simply because he cannot sit still.

What is your AE Partner story?

I started working in the summer of 2017, when, working at my previous job. I worked in computer service for 26 years. I realized that I had been working there a little too long, and something had to change in my life. I then talked to two former colleagues who already worked here. I asked everything I wanted to know and applied for the vacancy. And on my birthday I was called for an interview. It was successful, and soon after, I started working.
First impressions are hard to describe. In any case, I have only the best impressions. About job? I had been dealing with wires and electricity before. I have pulled various wires and cables for computers as it was no new field for me. Basically, I felt pretty good.
If a former colleague came to me now and asked how it is to work in AE Partner, I would tell him to go and start working (laughs). If, for example, my wife came and started working here, it would be quite difficult for her to understand what to do here. If you only know about electricity that it is a dark thing that shines brightly and hits your nails – it’s difficult to work successfully. But a person can learn everything if he wants, because, as you know, everything is only in the head.
Here, each group is like its own republic. I have worked in a wire preparation group for two weeks. There exist other specifics.
I have worked in a warehouse for one week, there is another republic there again, I have also helped the Technical Department. I have also worked for mehs (in a mechanical workshop). I have only fixed a panel in the Test group, but I have not tested anything yet. I would have to seriously learn to participate in the test.

Where do you find motivation? How do you deal with routine?

I like being in motion. I just need it. I can’t sit at home.

What is your motto in life?

They change for me, but now I have one – laugh at life because life doesn’t cry about you. And there are at least 2 exits from each deadlock.
Oriental philosophies are close to me. There is an easy way to get in the mood. Instead of waiting for the mood to appear, just smile stupidly, and your mind will adjust to that smile. The harder it is, the more you need to smile.

How do you spend your free time? Do you have a hobby?

I have different hobbies. There are 2-3 constant and many variable hobbies. For example, constants are watching a movie on TV with beer and crisps, having a sauna at least 2x a week, and boating in the company of friends in the summer. I made a sauna at home, in a farm building, myself.
Speaking of changing hobbies. In the summer of 2020, when there was less to do, the muse came to me, and I made a table and a bench from the woods found in the attic. I like different carpentry works.
My wife said – build a summer cafe for your granddaughter. Made it from pallets with the whole sink, as it should be.
I make mosaics from small pieces, I send a picture to the Chinese, they send me those pieces and a printed page where to put them. It took about 3 months for one photo, but it could stick together in a month if in a hurry.
Of course, I exercise, and as the gym at the moment is closed, I lift weights in the garage. I swim, every now and then I ride my bike, I run – I have run several half marathons. For a while I played ice hockey in the position of goalkeeper. I can safely say that it is the most difficult position on the hockey field. Winter swimming in the sea, Beberliņi. I like to go to the self-built sauna, learn the sauna rituals through self-study. Long live youtube! (laughs). So far no one has complained and everyone is still alive.
Sometimes I take photos and process pictures when there is an inspiration. From time to time I filme something and edit a video.
I would like to learn Arduino and its typical programming, but there is no time, only 36 hours a day.
A recent hobby – longer walks with like-minded people.
This year I joined the National Guard. I was once at the border guard, four and a half years.
By the way, looking back in the not too distant past, it turns out that I have also left some traces on the path of Latvia’s independence. In January 1991, I was in barricades in Liepaja. For which I have also received a state-level award – the Order of Barricades. I was one of the first to join the Latvian Border Guard in November 1991. In 1992, I was at the first border guard assignment at the Rucava border checkpoint.
I do everything. There is no time to a standstill.
I have so much to do! (laughs)

Is there anything you would like to tell others?

If there is a problem, you need to think about whether what is happening now will still bother you in ten years. Probably not. Or when speaking simply, there will be other problems, these will be forgotten. As they say in the East, everything that happens is for the better.
If the problem can be solved, then there is no need to worry about it. Just solve it! If not, then what is the point of worrying?

To not experience burnout, you have to find time for yourself, your hobbies, even if you only have 36 hours a day.

This website uses cookies to improve your experience while you navigate through the website. Out of these cookies, the cookies that are categorized as necessary are stored on your browser as they are as essential for the working of basic functionalities of the website. We also use third-party cookies that help us analyze and understand how you use this website. These cookies will be stored in your browser only with your consent. You also have the option to opt-out of these cookies. But opting out of some of these cookies may have an effect on your browsing experience.
Nepieciešams Always Enabled
Nepieciešamās sīkdatnes ir absolūti nepieciešamas, lai vietne darbotos pareizi. Šajā kategorijā ietilpst tikai sīkfaili, kas nodrošina vietnes pamatfunkcijas un drošības funkcijas. Šīs sīkdatnes nesaglabā nekādu personisku informāciju.
Nav nepieciešams
Jebkuras sīkdatnes, kas, iespējams, nav īpaši nepieciešamas, lai vietne darbotos, un tiek īpaši izmantotas, lai apkopotu lietotāja personas datus, izmantojot analīzi, reklāmas, citu iegultu saturu, tiek sauktas par nevajadzīgām sīkdatnēm. Pirms šo sīkfailu palaišanas jūsu vietnē ir jāiegūst lietotāja piekrišana.
SAVE & ACCEPT